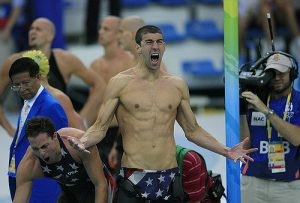 Michael Phelps shared the spotlight at the Beijing Olympics with — a swimsuit. The Speedo LZR racer swimsuit reportedly takes 20 minutes to put on, covers swimmers from chest to calf and, most important, smooths skin that normally “flaps” in the water. It gives swimmers a more frictionless glide. Oh, and it seems to help them ____________________.

Tweaking a person’s genes for sports could, at the outset, be as easy as choosing from a menu. Scientists know of 187 genes linked to human fitness or athleticism [source: Rankinen]. For instance, some genetic variations are linked to running the 2,000-meter particularly well [source: Cam]. “Tweaking” might mean ____________________ of one of these nearly 200 genes or amplifying or lessening their activity in the athlete.

Scientists don’t know what many of these “sports” genes do. For safety’s sake, an athlete might tweak a gene with a well-understood function. One potential candidate might be the IGF-1 gene for insulinlike growth factor-1, which repairs and ____________________. The gene for erythropoietin (EPO), which boosts red blood cells thereby raising blood oxygen and endurance, ____________________. Athletes, particularly cyclists, have been known to dope with synthetic EPO [source: Wells].

It’s hard to say what would happen to an athlete who tried gene doping. In the world of human experiments, scientists have only transferred genes to make sick people healthy, not healthy people better.

Bioethicist Thomas Murray speculated on what would happen if an athlete were to use today’s technology in an article for WADA’s Play True magazine. He wrote that most athletes would get no boost beyond the placebo effect, many would be harmed and a few, very improbably, might ____________________. But Murray argued it wouldn’t be enough to upset the competitive balance in Olympic sports. That’s because scientists have trouble carefully controlling the results of gene delivery: They can’t deliver a large effect without also delivering a large risk [source: Friedmann].

Gene doping is against the rules in many sports. In 2003, WADA put gene doping on its prohibited list [source: USADA]. Many sports governing bodies accept and use the list, thereby prohibiting gene doping for athletes participating in the Olympics, Paralympics and many other events [source: WADA]. However, the list isn’t used in Major League Baseball, the National Basketball Association or the National Football League [source: Associated Press].

Scientists and doctors who inject genes into healthy people ­­­­­____________________. Universities and hospitals could penalize staff members for performing a human experiment not approved by an ethics committee. If the athlete were harmed, the doctor could be sued for malpractice and lose his or her medical license, says Maxwell Mehlman, a law professor at Case Western Reserve University School of Medicine.

(Adapted from howstuffworks.com on 21 February 2017)