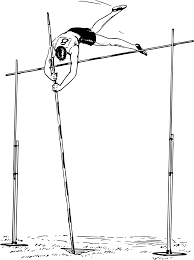 Bubka began pole-vaulting at age 9. When his coach, Vitaly Petrov, was transferred (1) to Donetsk, Ukraine, Bubka, at age 15, followed. Bubka won the pole vault at the 1983 world track-and-field championships in Helsinki, Finland, with a vault of 5.7 metres. In subsequent (2) years, Bubka changed the standards of pole-vaulting, setting numerous world records.

In 1991 in San Sebastián, Spain, he became the first pole-vaulter to jump 6.1 metres, but a year later, at the 1992 Olympic Games in Barcelona, Bubka failed to place in the event. In 1994 in Sestriere, Italy, he broke his previous world record with a jump of 6.14 metres. Bubka attended (7) the 1996 Olympics in Atlanta, but an injury prevented him from competing. In 1997, however, Bubka won an unprecedented (8) sixth world championship in pole vaulting. At the 2000 Games in Sydney, Bubka competed but failed to qualify for the final. He retired (9) from competition and became an active member of the International Olympic Committee.

Bubka’s speed and strength enabled him to use poles that were unusually long and stiff for better catapulting action. He was noted for a vaulting style in which he gripped (10) his pole several inches higher than other competitors.