Dav Pilkey: What it’s like to top banned book lists around the world 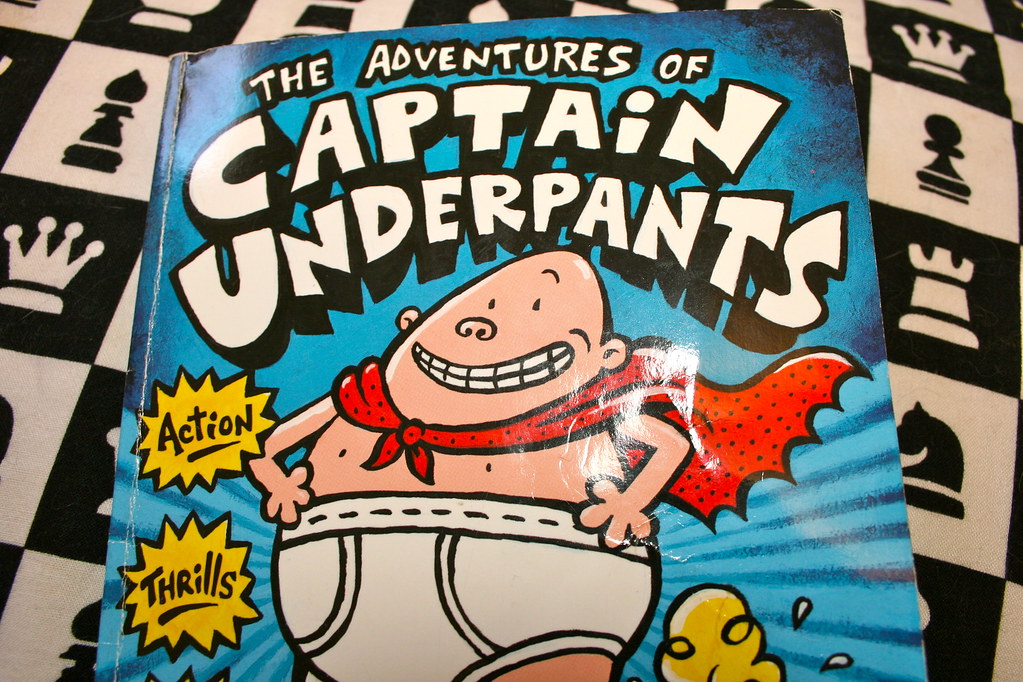 Dav Pilkey’s bestselling Captain Underpants books have been pulled from the shelves and out of children’s hands for being ‘inappropriate’ and ‘anti-establishment’. Here’s why that’s so wrong.

I guess I really shouldn’t be surprised that my Captain Underpants series continues to top banned books lists around the world. After all, __________ (1) by my second grade teacher. She took things a step further by actually ripping my pencil-drawn comics to shreds, telling me that I couldn’t spend the rest of my life making silly books. Fortunately, I was not a very good listener.

The Captain Underpants books __________ (2), at my special desk in the hallway. (That’s where I often sat when the teacher found me a bit too “energetic” for the classroom.) They contain no sex, no profanity, no nudity, no drugs, and no graphic violence (well, nothing more violent than you’d see in a Tom and Jerry cartoon or a Three Stooges short.) In 2012 and 2013, the books earned the #1 spot on the American Library Association’s Top Ten Most Frequently Challenged Books List, beating out Fifty Shades of Grey. __________ (3)

People often ask me how I’d want to respond to those critics who would rather see __________ (4) than handed to young readers. I do have an answer, and it boils down to the fact that not every book is right for every person. Some grown-ups are not amused __________ (5), and so they try to stomp those things out.

Recently, I heard from a young boy who had that very experience. His teacher had heard him giggling as he read Captain Underpants to himself in school. When she saw the cover of the book, she yanked it away and told him that __________ (6).

But later at lunch, the boy saw his teacher actually reading the book, and he was surprised to see her laughing out loud. He went up to his teacher and asked her about it. (This is one brave kid!) She admitted __________ (7), and she apologized and gave the book back to him. I was glad to learn that this boy’s story had a happy ending, but I was a little sad too – because in her attempt to steer her young student toward “real literature,” she’d almost turned him off reading entirely.

My primary goal with Captain Underpants is to make kids laugh and to give them a positive experience with reading at a crucial time in their development. Recent studies have shown that children who __________ (8) become better readers. And it’s not just that – a British Cohort Study from 2011 found that kids who regularly read for pleasure are more likely to excel in vocabulary, spelling, and maths. (Who knew!) Another recent study at UCL’s Institute of Education found that habitually reading for pleasure helps enable children to “absorb and understand new information and affects their attainment in all subjects.” Children who dislike reading are in real danger of becoming functionally illiterate adults. So when a child connects to a book – __________ (9) – it can really change the course of that child’s life! Finding the right book is what turns ordinary kids into lifelong readers.

Although my books have been deemed “anti-authoritarian” and “inappropriate” by some, I’ve heard from parents, teachers, and kids alike that they’ve helped turn non-readers into readers. I’ve even had kids tell me they’ve “graduated” from reading my books to longer and more complex stories, whether it’s Harry Potter or the Hunger Games. For me, I’d rather focus on that than on the handful of challengers.

I understand that people are __________ (10) about books, but it should be just that: a difference of opinion. All that’s required is a simple change. Instead of saying “I don’t think children should read this book,” just add a single word: “I don’t think my children should read this book.” I made a video to demonstrate how this simple change can allow people to disagree without limiting the choices of others.

When it comes to books, we may not all agree on what makes for a good read – but I hope we can agree that letting children choose their own books is crucial to helping them learn to love reading.

a) That was a surprise to me!

b) she did not allow garbage like that in her classroom

c) choose their own reading material

f) my books pulled from shelves

g) entitled to their own opinions

h) to having judged the book by its cover and title

k) by the kinds of things that make most children laugh