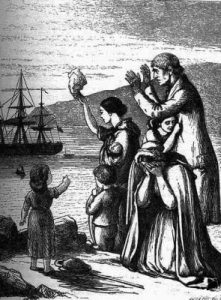 Great Famine, also called Irish Potato Famine, Great Irish Famine, or Famine of 1845–49, famine that occurred in Ireland in 1845–49 when the potato crop failed in successive years. The crop failures were caused by late blight, a disease that destroys both the leaves and the edible roots, or tubers, of the potato plant. The causative agent of late blight is the water mold Phytophthora infestans. The Irish famine was the worst to occur in Europe in the 19th century.
In the early 19th century, Ireland’s tenant farmers as a class, especially in the west of Ireland, struggled both to provide for themselves and to supply the British market with cereal crops. Many farmers ___ (1), given the small size of their allotments and the various hardships that the land presented for farming in some regions. The potato, which had become a staple crop in Ireland by the 18th century, was appealing in that it was a hardy, nutritious, and calorie-dense crop and ___(2). By the early 1840s almost half the Irish population—but primarily the rural poor—had come to depend almost exclusively on the potato for their diet. The rest of the population also consumed it in large quantities. A heavy reliance on just one or two high-yielding types of potato greatly reduced the genetic variety that ordinarily prevents the decimation of an entire crop by disease, and thus the Irish became vulnerable to famine. In 1845 a strain of Phytophthora arrived accidentally from North America, and that same year Ireland had unusually cool moist weather, ___ (3). Much of that year’s potato crop rotted in the fields. That partial crop failure was followed by more-devastating failures in 1846–49, as each year’s potato crop was almost completely ruined by the blight.
The British government’s efforts ___ (4)were inadequate. Although Conservative Prime Minister Sir Robert Peel continued to allow the export of grain from Ireland to Great Britain, he did what he could to provide relief in 1845 and early 1846. He authorized the import of corn (maize) from the United States, ___ (5). Under the Liberal (Whig) cabinet of Lord John Russell, which assumed power in June 1846, the emphasis shifted to reliance on Irish resources and the free market, which made disaster inevitable.
Much of the financial burden of providing for the starving Irish peasantry was thrown upon the Irish landowners themselves (through local poor relief) and British absentee landowners. Because the peasantry was unable to pay its rents, however, ____ (6)with which to support them, and the result was that hundreds of thousands of Irish tenant farmers and labourers were evicted during the years of the crisis. Under the terms of the harsh 1834 British Poor Law, enacted in 1838 in Ireland, the “able-bodied” indigent were sent to workhouses rather than being given famine relief per se. British assistance was limited to loans, helping to fund soup kitchens, and ___ (7)and other public works. The Irish disliked the imported cornmeal, and reliance on it led to nutritional deficiencies. Despite those shortcomings, by August 1847 as many as three million people were receiving rations at soup kitchens. All in all, the British government spent about £8 million on relief, and some private relief funds were raised as well. ____(8), lacking the money to purchase the foods their farms produced, continued throughout the famine to export grain, meat, and other high-quality foods to Britain. The government’s grudging and ineffective measures to relieve the famine’s distress intensified the resentment of British rule among the Irish people. Similarly damaging was the attitude among many British intellectuals that the crisis was a predictable and not-unwelcome corrective to high birth rates in the preceding decades and perceived flaws, ___ (9), in the Irish national character.
The famine proved to be a watershed in the demographic history of Ireland. As a direct consequence of the famine, Ireland’s population of almost 8.4 million in 1844 had fallen to 6.6 million by 1851. The number of agricultural labourers and smallholders in the western and southwestern counties underwent an especially drastic decline. A further aftereffect of the famine was thus the clearing of many smallholders from the land and the concentration of landownership in fewer hands. Thereafter, ____ (10)for grazing sheep and cattle, providing animal foods for export to Britain.
About one million people died from starvation or from typhus and other famine-related diseases. The number of Irish who emigrated during the famine may have reached two million. Ireland’s population continued to decline in the following decades because of overseas emigration and lower birth rates. By the time Ireland achieved independence in 1921, its population was barely half of what it had been in the early 1840s.
(Adapted from britannica.com on 28 January 2016)