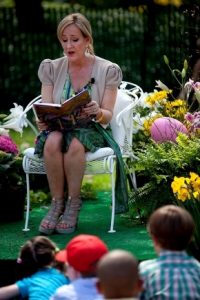 At a fan preview of next month’s “Fantastic Beasts and Where to Find Them” on Thursday, J.K. Rowling said she is “pretty sure” there will be five movies in the new “Harry Potter” prequel series. Rowling _______________(1 ALREADY/WRITE) the script for the second installment, which is slated to open in 2018. It, too, will revolve around zoologist Newt Scamander (Eddie Redmayne), but will move from New York to another large city. Rowling did not confirm whether the next three films will feature Newt.

Headquartered in London and streamed in major cities across the globe, Thursday’s preview, which I _______________ (2 CATCH) in New York, showcased the opening scene of “Fantastic Beasts” and an action-packed montage of footage. Put simply, it feels very much like a “Harry Potter” movie, which is nice. (David Yates, who directed the final four “Potter” installments, also made “Fantastic Beasts” and will helm its sequel.)

The movie _______________ (3 OPEN) with a series of Daily Prophet headlines that announce the wizarding world’s recent history: The year is 1926, and non-magical folk (called “No-Maj,” instead of “Muggles,” in America) _______________ (4 PERSECUTE) witches and wizards. The ownership of beasts has been outlawed, proving problematic for Newt, who is traveling with a cute creature that looks like some kind of cross between a platypus and a squirrel. (Maybe other “Harry Potter” fans will recognize the little delight. I could never remember my bowtruckles from my pygmy puffs.) To make matters worse, Grindelwald, the dangerous master of Dark Magic, _______________ (5 FLEE), leaving the community in chaos.

Yates said that Dumbledore will show up in “Fantastic Beasts,” _______________(6 SHARE) a scene with Newt and Percival Graves (Colin Farrell), the head of the Department of Magical Law Enforcement. Grindelwald will also appear, so maybe we can get a nice little love scene between the two wizards, considering we now know that Dumbledore fell in love with Grindelwald.

After the event ended, Rowling, who recently co-wrote the play “Harry Potter and the Cursed Child,” _______________(7 RESPOND) to fan reactions on Twitter. For anyone not convinced that, in the midst of Hollywood’s bloated franchise infatuation, we need five of these whoppers, here’s Rowling’s response:

(Adapted from huffingtonpost.com on 13 October 2016)