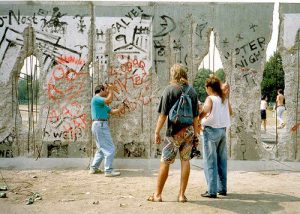 On 9 November 1989 East German officials opened the Berlin Wall, allowing travel from East to West Berlin. The following day, celebrating Germans began to tear the wall ______________ (1). One of the ugliest and most infamous symbols of the Cold War was soon reduced to rubble that was quickly snatched up ______________ (2) souvenir hunters. The East German action followed a decision by Hungarian officials a few weeks earlier to open the border ______________ (3) Hungary and Austria. This effectively ended the purpose of the Berlin Wall, ______________ (4) East German citizens could now circumvent it by going through Hungary, into Austria, and thence into West Germany. The decision to open the wall was also a reflection of the immense political changes taking ______________ (5) in East Germany, where the old communist leadership was rapidly losing power and the populace was demanding free elections and movement toward a free market system. The action also ______________ (6) an impact on President George Bush and his advisors. After watching television coverage of the delirious German crowds demolishing the wall, many in the Bush administration became ______________ (7) convinced than ever that Soviet leader Mikhail Gorbachev’s statements about desiring a new relationship with the West must be taken more seriously. ______________ (8) 1956 and 1968, when Soviet forces ruthlessly crushed protests in Hungary and Czechoslovakia, respectively, Gorbachev actually encouraged the East German action. As such, the destruction of the Berlin Wall was one of the most significant actions leading to the end of the Cold War.