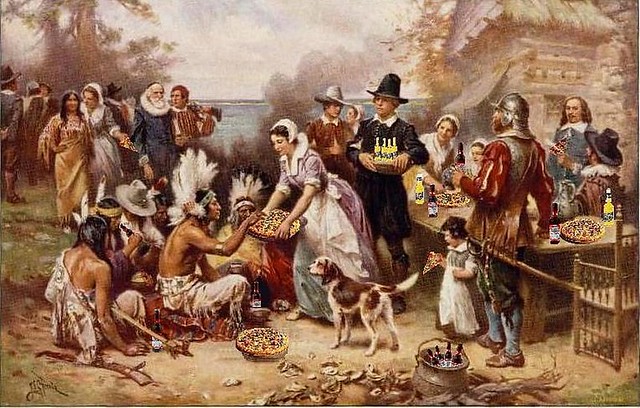 For many Americans, the Thanksgiving meal includes seasonal dishes such as roast turkey with stuffing, cranberry sauce, mashed potatoes and pumpkin pie. The holiday f_ _ _ _ (=pojedina) (1) dates back to November 1621, when the newly arrived Pilgrims and the Wampanoag Indians gathered at Plymouth for an autumn harvest c _ _ _ _ _ _ _ _ _ _ (=praznovanje) (2), an event regarded as America’s “first Thanksgiving.” But what was really on the m _ _ _ (=jedilnik) (3) at the famous banquet, and which of today’s time-honored favorites didn’t earn a place at the table until later in the holiday’s 400-year history?

Wild—but not domestic—turkey was plentiful in the region and a common food source for both English s _ _ _ _ _ _ _ (=naseljenci) (4) and Native Americans. But it is just as likely that the hunters returned with other birds we know the colonists regularly consumed, such as ducks, g _ _ _ _ (=gosi) (5) and swans. Instead of bread-based stuffing, herbs, onions or nuts might have been added to the birds for extra f _ _ _ _ _ (=okus) (6).

Turkey or no turkey, the first Thanksgiving’s attendees almost certainly got their fill of meat. Winslow wrote that the Wampanoag guests arrived with an offering of five deer. Culinary historians speculate that the deer was roasted on a spit over a smoldering fire and that the colonists might have used some of the venison to whip up a hearty s _ _ _ (=enolončnica) (7).

Local vegetables that likely appeared on the table include onions, beans, lettuce, spinach, cabbage, carrots and perhaps peas. Corn, which records show was plentiful at the first harvest, might also have been served, but not in the way most people enjoy it now. In those days, the corn would have been removed from the cob and turned into cornmeal, which was then b _ _ _ _ _ (=kuhan v vodi) (8) and pounded into a thick corn mush or porridge.

Fruits indigenous to the region included blueberries, plums, grapes, gooseberries, raspberries and, of course cranberries, which Native Americans ate and used as a natural d _ _ (=barvilo za lase) (9). The Pilgrims might have been familiar with cranberries by the first Thanksgiving, but they didn’t boil theim with sugar as the sacks of sugar that traveled across the Atlantic on the Mayflower were nearly or fully depleted by November 1621.

Culinary historians believe that much of the Thanksgiving meal consisted of s _ _ _ _ _ _ (=morski sadeži) (10), which is often absent from today’s menus. Mussels in particular were abundant in New England and could be easily harvested because they clung to rocks along the shoreline. Lobster, bass, clams and oysters might also have been part of the feast.

Whether mashed or roasted, white or sweet, potatoes had no place at the first Thanksgiving. Potatoes were more popular in South America.

Both the Pilgrims and members of the Wampanoag tribe ate pumpkins and other squashes indigenous to New England—possibly even during the harvest festival—but the fledgling colony lacked the butter and  wheat flour necessary for making pie c _ _ _ _ (=skorja) (11). Moreover, settlers hadn’t yet constructed an o _ _ _ (=pečica) (12) for baking. According to some accounts, early English settlers in North America improvised by hollowing out pumpkins, filling the shells with milk, honey and spices to make a custard,  then roasting the gourds whole in hot ashes.