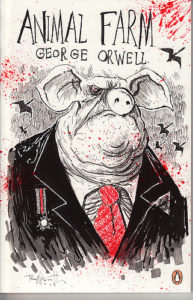 9 And so, almost before they knew what was happening, the Rebellion had been successfully carried through: Jones was _______________, and the Manor Farm was theirs.

11 These Seven _______________ would now be inscribed on the wall; they would form an unalterable law by which all the animals on Animal Farm must live for ever after.

2 After the ______________ of the flag all the animals trooped into the big barn for a general assembly which was known as the Meeting.

5 They were all carrying sticks, except Jones, who was marching ahead with a gun in his hands. Obviously they were going to attempt the ______________ of the farm.

6 Many meetings were ______________ in the big barn, and the pigs occupied themselves with planning out the work of the coming season.

7 This arrangement would have worked well enough if it had not been for the ______________ between Snowball and Napoleon.

11 In future all questions relating to the working of the farm would be settled by a special ______________ of pigs, presided over by himself.

1 They were well aware that everything that they did was for the ______________ of themselves and those of their kind who would come after them.

3 The advantage of only having to feed themselves, and not having to support five ______________ human beings as well, was so great that it would have taken a lot of failures to outweigh it.

7 The animals huddled about Clover, not speaking. The ______________ where they were lying gave them a wide prospect across the countryside.

11 The fear and despair they had felt a moment earlier were drowned in their ______________ against this vile, contemptible act.