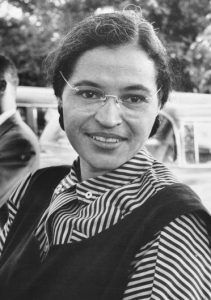 In 1932 she married Raymond Parks, who encouraged her to return to high school and earn a diploma. She later made her living as a seamstress. In 1943 Parks became a member of the Montgomery chapter of the National _______________ (3 ASSOCIATE) for the Advancement of Colored People (NAACP), and she served as its secretary until 1956. On December 1, 1955, she was arrested for refusing to give her bus seat to a white man, a violation of the city’s _______________ (4 RACE) segregation ordinances. Under the aegis of the Montgomery improvement Association and the _______________ (5 LEADER) of the young pastor of the Dexter Avenue Baptist Church, Martin Luther King, Jr., a boycott of the municipal bus company was begun on December 5. (African Americans constituted some 70 percent of the ridership.) On November 13, 1956, the U.S. Supreme Court upheld a lower court’s _______________ (6 DECIDE) declaring Montgomery’s segregated seating unconstitutional, and the court order was served on December 20; the boycott ended the _______________ (7 FOLLOW) day. For her role in igniting the _________________ (8 SUCCESS) campaign, which brought King to national prominence, Parks became known as the “mother of the civil rights movement.”

In 1957 Parks moved with her husband and mother to Detroit, where from 1965 to 1988 she was a member of the staff of Michigan Congressman John Conyers, Jr. She remained active in the NAACP, and the _______________ (9 SOUTH) Christian Leadership Conference established the annual Rosa Parks Freedom Award in her honour. In 1987 she cofounded the Rosa and Raymond Parks Institute for Self _______________ (10 DEVELOP) to provide career training for young people. She was the recipient of numerous awards, including the Presidential Medal of Freedom (1996) and the Congressional Gold Medal (1999). Her autobiography, Rosa Parks: My Story (1992), was written with Jim Haskins.
(Adapted from www.britannica.com on 22 January 2016)