How one man built an island of plastic bottles 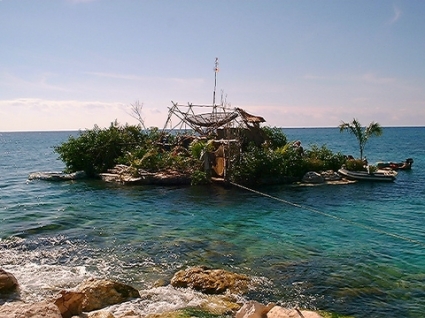 The island ____________________ (1 OWN) by a British artist named Richard Sowa and it isn’t your usual tropical getaway. In fact, it’s not an island at all, at least not in the typical sense. Joysxee is floating on a man-made base of about 150,000 air-filled bottles held inside large nets. This buoyant bottom layer is covered with sand, pallets and soil.

The roots from the island’s mangrove forest have woven their way through these levels, ____________________ (2 PROVIDE) an extra anchor and natural structural reinforcement. Joysxee is tethered to land, and this connection is used to provide internet service, electricity from solar panels and an additional anchor.

Sowa built the island himself and continues to perform maintenance, sometimes with the help of visiting volunteers (he ____________________ (3 OFFER) tours since 2008). Guests are ferried to the island in an eight-passenger barge made from — you guessed it — plastic bottles.

Creating this island has been a process. Joysxee ____________________ (4 BEGIN) as a humble foliage-covered raft, but has grown into a space that’s large enough to allow Sowa to live a mostly self-sufficient lifestyle. The three-story, two-bedroom home with a hot tub is certainly more than modest. The property also ____________________ (5 HAVE) a rainwater collection system, showers and a fully functioning bathroom with dry compost toilet.

Mangroves hold the whole thing together, but they are not the only foliage on Joysxee. Sowa tends gardens where he grows his own vegetables, including tomatoes and spinach. He also keeps fruit trees.

Joysxee is not Sowa’s first attempt at a plastic-bottle island. His first attempt was years ago on Mexico’s West Coast. Unfortunately, the residents of a nearby beach area complained about his rudimentary shack perched on plastic bottles. Shortly after, he ____________________ (6 FORCE) to leave.

Sowa then built a more ambitious project called Spiral Island on Mexico’s Caribbean coast in the late 1990s. This time, he used a plastic-bottle-base with wood and mangrove roots for structural support. This island had a base of 250,000 bottles and featured mangrove trees that grew to more than 25 feet high.

Spiral did not survive Hurricane Emily, though, which ____________________ (7 STRIKE) the Caribbean in 2005. Workers building a condo development nearby helped clean the island’s wreckage. They actually preserved some of the bottle-filled nets, giving them back to Sowa. He used these re-recycled bottles to start Joysxee with the help of local environmentalists who wanted to support his eco-island ideas. ____________________ (8 COLLECT) more bottles, Sowa built his new island between 2007 and 2008. He decided to place it inside a lagoon on Isla Mujeres to protect Joysxee from suffering the same fate as Spiral Island.

While the media, including Ripley’s Believe It or Not and the Travel and Discovery channels, have covered the island as a novelty, Sowa’s statements on his website show that he thinks that his island constructions could be the start of something bigger.

Environmentally, the island is an example of a wind-, solar- and wave-powered living space. Sowa claims ____________________ (9 PERFECT) a wave-powered air conditioner, water pump and electricity charger at the moment. Furthermore, the mangroves can clean the air by absorbing carbon dioxide.

Sowa points out that his islands have been virtually unsinkable because there are so many bottles that, even if a few puncture or leak, the overall structure ____________________ (10 NOT AFFECT). He also says that, because they are floating, such islands would not be affected by rising sea levels, flooding or other disasters.

According to his site, Sowa welcomes guests at Joysxee and also offers tours. For tours, including a return trip to the shore, he requests a “donation of $5 or more.” Volunteers also can stay in his guestroom for free, or for a $20 donation (with breakfast included).

(Adapted from https://www.mnn.com/lifestyle/responsible-living/stories/island-plastic-bottles-joysxee-island on 5 November 2018)