/Tenses: put the verb in brackets into the correct form (active and passive)./ 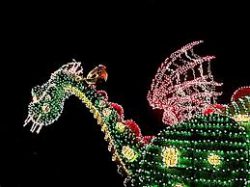 You might have heard that the inhabitants of Postojna are called »bag makers«, but you have probably never learned the reason why. Mateja Premrl, the textile and clothing designer, has disclosed and revived the story with her Bag of Courage.

“The bag revives the legend of Jakob the shepherd, who _______________ (1 CHASE OFF) the dreadful dragon from the cave in Postojna. In gratitude, the locals made a bag for Jakob from the pieces of dragon leather. Since then, the inhabitants of Postojna _______________ (2 KNOW) as »bag makers«,” Mateja gave the short version of the folk tale Dragon in the Postojna cave, the set book for all the locals, which had inspired her to design the Bag of Courage.

The bag was designed as an official protocol souvenir from Postojna – as _______________ (3 BEFIT) the town of »bag makers«, according to Mateja. For Postojna she developed motives characteristic of the Postojna municipality, such as the proteus, the dragon, and the eagle, but she also included other Slovenian national motifs. “My bags are not hand-sewn from separate pieces, as they _______________ (4 BE), but they are finalized by hand, with a needle. They are embroidered by hand, mainly with Slovenian national motifs, but on approximately ten times larger scale, and in different colour combinations.”

“Today, these bags _______________ (5 BRING) closer tradition and contemporariness. They are a warm link between the techniques used by our grandmothers, and the lives we live. It is my wish _______________ (6 OPEN) to young people the door to our cultural heritage, so that it would inspire them to enrich their own fashion world, and to gain understanding of the aesthetics as a value, and as valuable.”

She _______________ (7 START) creating the bag months ago, when Anuša Gaši, the mastermind of the project Po-stoj na živi ulici z mladimi (free translation being: Step to the street full of life, with young people – it is a project aimed at _______________ (8 PUT) Postojna to the list of the Unicef children-friendly towns), invited her to participate. The purpose of the project was to improve the conditions and contents for children and youth, and Mateja’s task within the project was to design a Bag of Courage as a gift intended for guests of honour of the mentioned project: the President of the Republic Borut Pahor, and musicians Tomi Meglič, Tinkara Kovač and Marko Soršak – Soki.