Technology firms may struggle to disrupt the food business 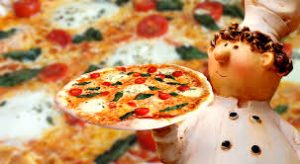 The office parks of Silicon Valley boast many firms that are trying to change the world. But there are plenty with more modest goals. Zume Pizza, a tiny startup that is located a few miles from the sprawling headquarters of Google, wants to redesign the way pizzas are made. Zume has programmed robots to make pizzas that are then put into a van and baked as they hurtle towards customers. Ovens are timed to finish cooking in sync with the vehicles’ arrival at their destination, so the pies are always piping hot.

In recent weeks spies from _______________ (1) pizza companies and from food-delivery firms have been driving by in unmarked cars taking photographs of the office and the vans, says Julia Collins, one of Zume’s co-founders. To protect its business, the startup has patented the whole process of cooking food in ovens while a vehicle is moving (the patent probably gives Zume defensible _______________ (2) property, says one patent lawyer). The company only operates in Mountain View, but has expansion plans. Since its founding last year it has reportedly raised $6m from investors, among them Jerry Yang, a co-founder and _______________ (3) boss of Yahoo, an early giant of the internet.

Tech entrepreneurs have not spared the food industry, but their principal focus has been on delivery services. Actually making the food represents a fresher opportunity. Restaurant chains have been slow to invest in technology themselves because the cost of labour is usually fairly _______________ (4), says John Glass, an analyst at Morgan Stanley, a bank. They have spent money on mobile payments and on online ordering, but there is scope for more innovation.

Disrupting food is not easy, however. The Melt, a fast-food chain that specialises in grilled cheese sandwiches, has boasted about its proprietary technology, including a “smart box” that it developed with former engineers from NASA to keep sandwiches _______________ (5) during deliveries. The chain has not been a great success and it has replaced its chief executive. Another startup, Hampton Creek, which has raised more than $120m from venture capitalists in order to create a vegan, environmentally-_______________ (6) version of mayonnaise and other kitchen staples, is now reportedly facing an inquiry into whether it bought its own products to inflate lacklustre sales figures (its CEO has denied any such purpose).

It is entirely possible that Zume has anticipated the eventual, widespread adoption of robots in restaurants, together with new systems for cooking meals. But startups face several big hurdles to success.

Scale is hard to achieve. Zume may not be able to afford many robots, which move the pizzas off a conveyor belt in its office-cum-factory after spraying them with tomato sauce. Humans still add the toppings before the pies go into the vans. The robots cost around $100,000 each, or the equivalent of hiring two e_______________ (7) employees for a year, says Alex Garden, Zume’s other co-founder. He reckons that buying them will pay off rapidly. That may be true, but Zume’s strategy is a capital-intensive one by the standards of most digital companies; it also owns all of its vehicles.

Competition is of course _______________ (8). It will take a long time for Zume to make any dent in the share of big established brands. The largest firms—Domino’s, Pizza Hut and Papa John’s—have in recent years taken even bigger slices of the pizza market, which is _______________ (9) an estimated $34bn in America. Such giants will surely start investing in technology properly in time. Tech-enabled delivery services also have lots of heft. One, Postmates, recently raised around $140m.

And reinventing food can be fraught. Zume’s product has the _______________ (10) taste of average pizza. But technologists can get things badly wrong. Soylent, a startup that offers drinkable meals that are popular among engineers who are too busy coding to eat, has recently stumbled. The algae it included in some of its products turned out to cause stomach problems. Food may be one realm where people do not mind getting stuck with version 1.0.