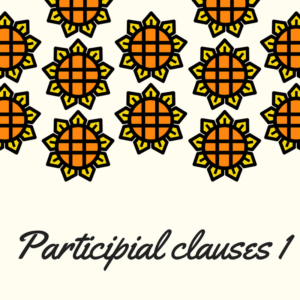 0 I didn’t stay at the party long because I didn’t like the music.

Not liking the music, I didn’t stay at the party long.

1 The pop star left the stage after she had sung only seven songs.

2 You must be careful when you’re crossing the street.

3 He had a serious accident while he was driving under the influence.

4 The wedding didn’t go according to plan because we hadn’t organized it well.

5 When America was discovered in 1492, it became a convenient continent for settlers.

6 I was soaking wet because I had forgotten to bring an umbrella.

8 While she was opening the window she was hit by a ball.

9 My parents were born in the 1970s Yugoslavia, thus they had a different childhood from mine.

10 The mayor resigned after he had constantly been criticised by the media.