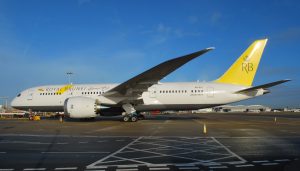 ‘As a woman, a Bruneian woman, it is such a great achievement. It’s really showing the younger generation or the girls especially that whatever they dream of, they can achieve it’

The first ever all-female flight deck crew for Royal Brunei Airlines _______________ (1 OPERATE)  a plane from Brunei to Jeddah in Saudi Arabia.

Although it was a milestone for the airline, the pilot crew touched down in a country where women are still not allowed to drive a car.

The occasion came just over three years after Captain Czarena _______________ (3 BECOME)  the first female captain of a flag carrier in Southeast Asia. She told The Brunei Times in 2012: “Being a pilot, people normally see it as being a male dominant occupation.”

“As a woman, a Bruneian woman, it is such a great achievement. It’s really showing the younger generation or the girls especially that whatever they dream of, they can achieve it,” said the captain, who completed her initial pilot training at the Cabair Flying School in Cranfield.

And Royal Brunei Airlines is committed to _______________ (4 GET) more women into the industry as it currently offers an Engineering Apprentice programme to both males and females.

But the airline’s landmark voyage also highlighted the restrictions women still face in Saudi Arabia. Although there is no law that prohibits women from driving, it is a rule imposed by conservative Muslim clerics.

In December 2014, Loujain al-Hathloul was detained after she tried to drive into Saudi Arabia from the United Arab Emirates. Maysa al-Amoudi, a friend who turned up to support her, was also detained. Both _______________ (7 RELEASE) after more than 70 days in custody.

Sarah Leah Whitson, the Middle East and North Africa director for Human Rights Watch said at the time: “After years of false promises to end its absurd restrictions on women, Saudi authorities _______________ (8 STILL/ARREST)  them for getting behind the wheel.

“The Saudi government’s degrading restrictions on women are what bring shame to the country, not the brave activists standing up for their rights.