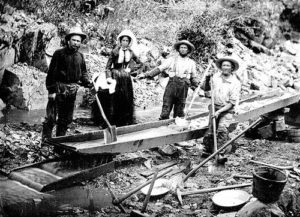 It was one of the most-significant events in U.S. history, and it all began with a water-powered sawmill. In 1848 Swiss immigrant John Sutter was building the structure along the American River in Coloma, California. On January 24, his carpenter, James W. Marshall, found something that made his “heart thump”—flakes of gold in a streambed. The two men hoped to keep the discovery a secret, but word soon began to spread. At first, many greeted the reports with skepticism even as newspapers began to write about “considerable quantities” of gold at Sutter’s Fort. Then, on December 5, 1848, Pres. James K. Polk confirmed the news during his State of the Union address, noting that “the accounts of abundance of gold are of such an extraordinary character as would scarcely command belief were they not corroborated by the authentic reports of officers in the public service.” What had been a steady trickle of gold seekers now became a stampede. As one newspaper noted, the discovery had “set the public mind almost on the highway to insanity.”

The Gold Rush sparked an unprecedented mass migration in the U.S. At the time of the discovery, the California territory’s population was approximately 160,000, the vast majority of whom were Native Americans. By August 1848, 4,000 gold miners had arrived in the area, and within a year about 80,000 “forty-niners” (as the fortune seekers of 1849 were called) had reached the California goldfields. By 1853 their numbers had grown to 250,000. Two years later, some 300,000 fortune seekers were estimated to have settled in California. While many were Americans, a significant number were from China, Europe, and South America.

The numbers were even more incredible given the arduous journeys the gold seekers undertook. While they might have been on the “highway to insanity,” there were no actual highways. Instead, most had to endure dangerous hikes or ocean voyages—and sometimes both. From the east, prospectors sailed around Cape Horn—which could take up to six months, during which time they faced possible shipwreck and little food. Others sailed to Panama, where they disembarked and then risked disease hiking across the Isthmus of Panama to catch a ship on the Pacific Ocean. The hardiest took the 2,000-mile (3,220-km) overland route, on which cholera outbreaks were common and deadly.

And once they arrived in California, more difficulties awaited. While it was estimated that some $2 billion in gold was extracted, few of the prospectors struck it rich. The work was hard—especially as the easily accessed surface gold disappeared—and prices were high. In some mining camps, a single egg cost $3 (more than $80 in today’s money), and a bag of flour could fetch $13 (nearly $365). In addition, living conditions were primitive—which contributed to further outbreaks of cholera—and many of the mining camps were lawless and violent. As one miner wrote, “There is a good deal of sin & wickedness going on here, Stealing, lying, Swearing, Drinking, Gambling & murdering.”

Although the Gold Rush ended in the late 1850s, it had a lasting effect on California and the U.S. The westward migration continued, with the Golden State taking on great importance. The rush hastened statehood for the territory in 1850, and many of its cities saw their fortunes rise, notably San Francisco.

And what became of John Sutter? For him, the Gold Rush was a disaster. Gold seekers overran his property, destroying or killing his livestock. Then the U.S. courts denied his claim to the land, which he’d been granted by Mexico. By 1852, at the height of the Gold Rush, Sutter had gone bankrupt.

(Adapted from www.britannica.com on 11 September 2017)

1 The first flakes of gold were found by chance. T/F

2 Professor James K. Polk confirmed the fact that a large quantity of gold had been discovered. T/F

3 Thousands of people moved to California and other American states in search of gold. T/F

4 Gold seekers were willing to risk their lives in order to find gold. T/F

5 Only a half of the people searching for gold got lucky. T/F

6 Cholera spread quickly because people were working in mines. T/F

7 It wasn’t Stutter’s fault that he had gone bankrupt. T/F