Why professional women’s sport is less popular than men’s 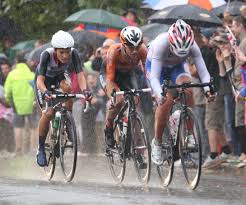 A few hours before the men’s Tour de France arrived in Paris on July 27th 2014, a group (or peloton) of women cyclists dashed up the Champs Elysees. It was the inaugural race of La Course, a one-day event organised by the people behind the Tour de France, and the latest attempt to launch a women’s version of the main competition. Previous efforts have foundered because of a lack of interest among sponsors and the public. The ____________________ (1 DIFFICULT) of creating a women’s Tour illustrates a wider phenomenon: with a few exceptions, professional women’s sport is much less popular than the male equivalent. Why?

If there were more ____________________ (2 SPONSOR) and media coverage, some say, then women’s sport would be more popular. Media outlets and sponsors retort that if women’s sport attracted more interest in the first place then they would invest more time and money in it. All sides agree on what it takes to make a sport successful: a balance of consumer, media and commercial appeal.

Sponsors are ____________________ (3 WILL) to finance individuals and teams that don’t get good exposure – and few female athletes do. The Women’s Sport and Fitness Foundation (WSFF) estimates that in 2013, women’s sports received 7% of coverage and 0.4% of the total value of commercial sponsorships. This is a ____________________ (4 VICE) circle: viewers want to watch sports at the highest professional standard, and sponsors want to be associated with the best athletes. Because of the lack of sponsorship many female athletes, even those who represent their countries, have to fit training around ____________________ (5 EMPLOY). Those who are paid usually earn less than male colleagues. The Professional Golfers’ Association, for instance, offers $256 million in prize money; the women’s association offers only $50 million. This ____________________ (6 EQUAL) is echoed in pay for coaches for women’s teams.

Things are changing. The English women’s cricket team became professional in 2014, signing a two-year sponsorship deal with carmaker Kia after winning back-to-back Ashes contests. Wimbledon, the oldest tennis tournament, started awarding women the same amount of prize money as men in 2007, and the prize money for the winner of La Course is equivalent to that for a stage winner in Le Tour. Other sports are being leaned on to follow suit. More ____________________ (7 STRIKING), the opinions of sports fans seem to be shifting: 61% of fans surveyed by the WSFF said they believed top sportswomen were just as ____________________ (8 SKILL) as their male equivalents and over half said women’s sport was just as exciting to watch.

This will matter more when, as seems likely, the increasing numbers of women participating in regular sport yield more potential pros. In Britain, 750,000 adults took up team sports after the 2012 Olympics; 500,000 of them were women. More female ____________________ (9 PARTICIPATE) and viewers should encourage sponsors and the media to balance their coverage. Until then, athletes could consider taking a leaf out of Marie Marvingt’s book. In 1908, when she was denied the right to ride in the Tour de France because she was a woman, she ignored the rules and raced anyway, 15 minutes behind the men. Of the 115 people who started the 4,488km (2,789 mile) race that year, only 37 managed to complete it: 36 men and one woman.