Burkinis are nasty, but then fashion is seldom liberating 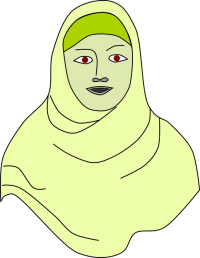 After an increasingly desperate few years, which the combined efforts of Emma Thompson, Doreen Lawrence and Alexa Chung have so far done little to relieve, Marks and Spencer has finally produced a garment that people want to talk about.

Yet more unusually, the object of interest, a blue burkini – a kind of whole-body swimming pyjama – is still, at the time of writing, available online, and looks as if it might be just the ticket for anyone planning a trip to broiling, jellyfish-infested waters. Though the suit’s purpose is not, you gather, physical protection. Rather, M&S stresses: “This burkini suit covers the whole body with the exception of the face, hands and feet, without compromising on style.”

Another obvious lie, you might think, from the same people who thought it clever to put Alexa Chung in a 1980s’ piecrust shirt. But some women who like swimming in saturated clothes with a skull-clinging hood have responded with enthusiasm to this addition to a fashion genre that is increasingly known as “modest wear” – presumably to distinguish it from the slag wear that is all other garments.

Yet more helpfully for M&S sales figures, its burkini was denounced by the French women’s rights minister, Laurence Rossignol. “What’s at stake is social control over women’s bodies,” she said. “When brands invest in this Islamic garment market, they are shirking their responsibilities and are promoting women’s bodies being locked up.” Fatally for this intervention, she added that women who favour burkinis are “like negroes who supported slavery”.

It was left, as Rossignol processed the outrage, to her fellow national, Pierre Bergé, the partner of the late Yves St Laurent, to expand on the culpability of modest wear suppliers, who now include H&M, Mango, Zara and, at the high end, the designers Dolce & Gabbana.

Forbes called it the company’s “smartest move in years”. Pierre Bergé, however, says: “In life, you have to choose the side of freedom.” More circumspect than the women’s minister, he stressed: “I am not an Islamophobe. Women have the right to wear headscarves, but I do not see why we are going towards this religion, these practices and mores, that are absolutely incompatible with our western freedoms.”

But, as with the M&S burkini, the Abaya range was a hit with at least some proponents of modest wear. The sourcing of demure clothing is – for this constituency – apparently almost as great a challenge as, for over size 16s, is any acknowledgement by TopShop of their existence or, for middle-aged women in finding any garments with age-appropriate sleeves, skirt lengths and necklines that do not shout either St Ives (indigo, workwear, massive knits) or “sassy” (the Boden word for as stylish as you are ever going to get now, before you die).

So there is nothing, you could argue, remotely inconsistent, pace M Bergé, in designers who are happy to indulge one affluent market by demeaning women, being eager to serve another by ditto. It just requires a different range of accessories, or constraints. Karl Lagerfeld, with his horror of fat/ugly women and view that Pippa Middleton’s face, falling short of his own, should never be seen, could similarly design, if he chose, to please the most oppressive patriarchs on Earth, without a hint of compromise.

Then again, the great Agnès Troublé, founder of Agnès B, has reportedly said she would never design for Islamic dress codes: “We should not normalise clothing which is significant in the way women are seen.”

Yet, since the fashion industry is neither an exclusively male edifice nor capable of summoning religious policing of its edicts (good luck, in its absence, with this season’s culottes), Bergé has good reason, like Agnès B, to question a commercial decision that could be interpreted, even at this milder end, as endorsing principles that erupt, in the less easy-going theocracies, in assaults on visible women.

Supposing non-wearers relax, as instructed, about British hijab users, who insist their individual choices bear absolutely no relation to women struggling, at physical risk, to break free of similar garments – or to the likelihood of little British girls being made to wear one – it is legitimate to ask why a secular fashion business would produce women’s clothing for which male clerics created the entire market.

Sell your burkinis, like M&S, a company that likes to make much of British “leading ladies”, on its promise to leave only the hands, feet and face visible? Would any man willingly wear this stuff to swim in?

But invoke modesty, and all women are judged, not just the ones in hijabs.

It’s why it was invented.