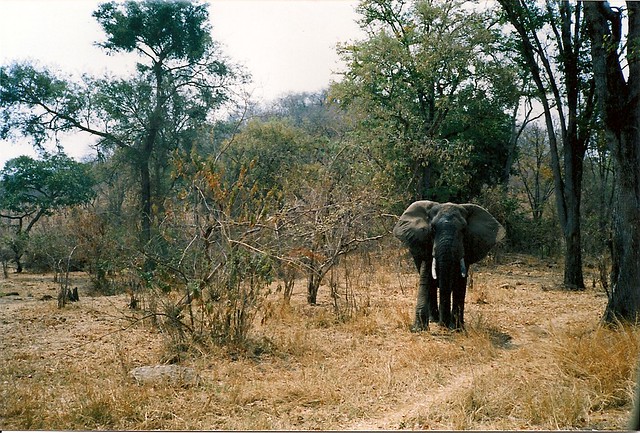 The black metal of the AR-15 rifle has worn silvery and shiny in parts after years of use. More manageable than an AK-47 in close-quarter combat, the weapon is precise enough to bring down an enemy target at 500 metres. Used for decades by anti-poaching units throughout Africa, today this gun is not carried by a typical swaggering male field ranger; this one is cradled securely and proficiently by Vimbai Kumire. “This job is not meant just for men,” she says, “but for everyone who is fit and strong.”

Kumire is a 32-year-old single mother whose husband ran off with a younger woman while she was pregnant with her second child. She is practising setting up an ambush in the early morning in Zimbabwe’s lower Zambezi Valley, nestling deep into the green undergrowth like a dappled shadow.

This is Africa’s poaching frontline, and these are not just regular female game rangers. If the team behind Kumire’s new job have anything to do with it, these women are a growing squad of environmental shock troops for a new type of community development offensive.

According to conservation biologist Victor Muposhi of Chinhoyi University of Technology, the lower Zambezi Valley has lost 11,000 elephants in the past 10 years. But he believes that hiring and training female rangers such as Kumire directly from the local communities is a game-changer.

“Developing conservation skills in communities creates more than just jobs,” says Professor Muposhi. “It makes local people directly benefit from the preservation of wildlife.” And that, he says, can save not only landmark species such as elephants but entire ecosystems.

Women’s empowerment is at the core of the programme, named Akashinga, which means the brave ones. “This is a true empowerment programme,” says Muposhi, “because you are dealing with a highly vulnerable and damaged group of young ladies.” Sitting on a rock looking north over one of Africa’s last great wildernesses, Muposhi explains that his early research shows the five-month-old programme is helping change these formerly unemployed single mothers into community leaders.

Primrose Mazliru, 21, stands in the gathering dusk near their camp among the new grass, bright green with the recent rains. Ramrod straight, shoulders back and proud, she smiles despite the vivid scar that runs across her upper lip, where her ex-boyfriend beat her in a drunken rage. “I can testify to the power of this programme to change my life, and now I have the respect of my community, even as a young single mother,” she explains.

Mazliru has already bought a small plot of land with her wages as a field ranger. “I don’t need a man in my life to pay my way for me and my child,” she says, a glint in her eye.

Like most countries in southern Africa, Zimbabwe uses game management areas around famous national parks such as Victoria Falls or Mana Pools as “buffer zones” to protect the animals. These buffer zones are huge tracts of land much larger than the parks themselves, originally created to benefit the surrounding communities by allowing limited trophy hunting by high-dollar foreign clients such as Walter Palmer, the American dentist who attracted worldwide condemnation after killing Cecil the lion on a hunt in 2015.

There are no fences between the hunting areas, or between the wildlife and the estimated 4 million people living on the borders of these protected lands. Some profits from the hunting have gone to support the communities which live in the wilderness areas designated for trophy hunting – almost 20% of Zimbabwe’s land.

According to Muposhi, these precious ecosystems are now under grave threat due to the collapse of commercial hunting, in part because of a growing ethical backlash. “Cecil the lion marked the birth of the greater debate around the issues of morals and ethics in hunting and whether it is sustainable or not.”

Revenues are plummeting and human populations around parks growing. “Five years from now,” says Muposhi, “if we do not have other options, then it will not be viable to save these areas.”

Damien Mander, the founder of the Akashinga initiative, is a tall, Australian, military-trained sniper, who would look very much at home in the centre of a rugby scrum. Mander was inspired by the story of the Black Mambas, the world’s first female, unarmed anti-poaching unit, who work near South Africa’s Kruger National Park. Having met some of the women on a fundraising trip to New York, where they were giving a talk, he saw the international support and interest they received and thought a similar project in Zimbabwe might be a good way to raise the profile of his own project, the International Anti-Poaching Foundation (IAPF). What transpired went way beyond those modest ambitions.

“Thirty-six women started our training, modelled on our special-forces training, and we pushed them hard, much harder than any training we do with men,” he explains from his tented camp at a secret location in the Zambezi Valley. “Only three dropped out. I couldn’t believe it.”

From the very first day of the women’s training, he saw that something very special was happening. He realised that women were the missing link to successful conservation and anti-poaching initiatives. “We have turned a security need into a community programme,” he said. In only five months, according to Mander, this pilot project is already putting more money per month into the local community than trophy hunting did per year.

Important people are noticing. Tariro Mnangagwa is a 32-year-old professional photographer who is visiting and training with the International Anti-Poaching Foundation’s Akashinga field ranger unit. She is also the youngest daughter of Zimbabwe’s new president, Emmerson Mnangagwa.

“These women show me hope,” she says. She heads to a beaten-up Land Rover to visit a community in search of a former poacher who wants to talk.

Annette Hübschle, a senior researcher and post-doctoral fellow at the University of Cape Town, believes that the Akashinga model could still be a great solution. While many western governments and conservation organisations take decisions in London, New York and Geneva, the people most affected are usually women in communities adjacent to protected areas in Africa. Community-driven conservation programmes based around empowerment and training for women such as Kumire and Mazliru offer a potential solution to the end of hunting.

Mander, and all his rangers, live on a vegan diet. His TED talk on veganism has been seen by millions of people around the world. He stopped eating animal products five years ago. “I was wandering around in the bush, protecting one group of animals and coming home and eating another. I could not live with the hypocrisy of that any more.”

The Akashinga have embraced it with gusto. “It’s great,” says Kumire with a huge smile, as she stands in the light of the cooking fire steaming with pots of beans and spinach-like greens. “I don’t miss meat at all, when I go home for leave and people try to feed me meat I can’t eat it because my stomach hurts if I do, and I tell people no, don’t give me meat, I am vegan!” The women around her smile and nod in agreement.

Muposhi, himself a vegan for 13 years, argues that showing communities they don’t need bushmeat is about setting an example, one that stops poaching and reduces the need to farm animals in wilderness areas – a driver of habitat loss. Muposhi is excited to see the project grow. “It is happening right in the middle of nowhere in the Zambezi Valley, and it is part of a greater movement,” he says. “We are going to develop it to become one of the best models of conservation of wildlife based on women’s empowerment.”

As the training exercise unfolds, the female rangers are hidden from sight, the muzzles of their AR-15s poking from tufts of grass. Slowly the two scouts designated as “poachers” walk down the animal track. When they get to the right spot the women explode into action, shouting “Get down! Down! Now, now, now!” Within moments they have the suspects handcuffed. When asked why the pretend “poachers” are shaking, Kumire says that suspects always lay “shaking on the ground”, she laughs. Mander ends the exercise, the women help their friends up with smiles, and together they quietly fall into formation and disappear back into the bush.

(Adapted from theguardian.com on 17 December 2017)

1 Poaching has been banned in Africa for more than ten years. _____

3 Female rangers are employed because they are better at their job than men. _____

8 Wild natural habitat is used by the locals in order to keep farm animals. _____