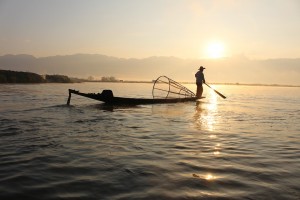 Humans have never eaten so much fish and other seafood, but nearly half of it is no longer caught wild but is grown in farms, says the United Nations. New figures from the Rome-based Food and Agriculture Organisation (FAO) suggest while around 80m tonnes of fish were caught “wild” in 2011-12, global aquaculture production set another all-time high at more than 90 million tonnes, including nearly 24 million tonnes of edible plants like seaweeds. In total, the world harvested an extra 10m tonnes of aquatic food in 2012 compared to the previous year, says the report. “Fish farming holds tremendous promise in responding to surging demand for food which is taking place due to global population growth,” the report says.

But the UN was upbeat on global fish stocks, identifying a marginal decrease from 30% to 28.8% in the over-exploitation of the stocks which it assessed. “71.2% of the fish stocks are being fished within biologically sustainable levels. Of these, fully-fished stocks – meaning those at or very close to their maximum sustainable production – account for over 60% and underfished stocks about 10%”, said a spokesman. “This is a reversal in [the] trend observed during the past few years, a positive sign in the right direction.”

But the authors warned that the burgeoning fish farming industry needs to become far less dependent on wild fish for feed and should rear many different species to avoid wastage. Small-sized species, they say, “can be an excellent source of essential minerals when consumed whole. However, consumer preferences have seen a switch towards larger farmed species whose bones and heads are often discarded.”

The rapid growth in the number of people living near coasts and fish farming’s ability to keep up with population growth has seen per capita fish consumption soar from 10kg per person in the 1960s to more than 19kg in 2012. It has also led to nearly 10-12% of the world’s population, or over 700m people, now depending on fisheries and aquaculture for their livelihoods, say the authors.

The UN estimates there are now about 4.7m fishing vessels in the world ranging from vast industrial trawlers to the small boats used by most people in developing countries.

The human diet continues to be limited to just a few fish species, says the report, with 10 species now accounting for about 24% of world marine capture fisheries in 2011. These include the Peruvian anchovy, the Alaskan pollock, the skipjack tuna and the Atlantic herring. Most of these species, says the UN, are now fully-fished and increases in their production may be possible only if effective restocking plans are put in place. A record 43% fall was recorded in catches of Peruvian anchovy, which is the world’s most popular fish. This species thrives in the cold, plankton-saturated Humboldt current along the coast of Peru and Chile and is essential to global fish farming. According to the report, nearly a third of the catch, of 4.69m tonnes in 2012 goes to the fishmeal industry and is used to fatten farmed seafood. Much of the rest of the anchovy catch is ground up into feed and rendered into oil for livestock.

1 Where are the FAO headquarters located?

2 Besides fish, what is also considered aquatic food?

5 Is over-exploatation of the fish stocks now a bigger problem than a year ago?

6 Why should small fish be eaten whole?

7 According to the article, do people prefer eating wild or farmed fish species?

8 How many people in the world do fishing to make a living?

9 What kind of fishing vessels do people in developing countries mostly use?

10 Name the fish species that is essential to global fish farming.